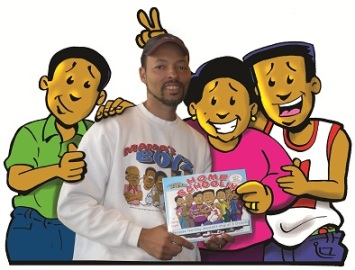 Cartoonist Jerry Craft will join Brenda Johnson Padgitt on ASWIFTT RADIO February 25, 2012 at 1:00 pm. CST to discuss his Comic Strip Characters Moma’s Boyz and how he uses his comic strip creation as a platform to mentor students. Mama’s Boyz is an award-winning comic strip that has been distributed by King Features Syndicate since 1995; making him one of the few syndicated African-American cartoonists in the country. His comic strip follows the lives of a widow raising her two teenage sons while running the family bookstore. Jerry has won three African American Literary Awards for best comic strip (2011, 2009 & 2004). For more information on this show you can contact ASWIFTT RADIO Host Brenda Johnson Padgitt at 1-800-775-2708 ext. 3060 or E-mail her at news@aswifttradio.net. (This show is apart of the ASWIFTT RADIO series “Uncommon Heros in the Neigborhood Giving Back to the Community”)