Adultery Was Never God’s Will: The Aftermath On The Family

Join ASWIFTT RADIO Host Brenda Johnson Padgitt on July 30, 2016 at 1 pm CST along with Minister Allen Parr on the show “Adultery Was Never God’s Will: The Aftermath On The Family.”  There will be a discussion about some of the permanent affects that adultery has on the family. Practical suggestions of how to avoid this deadly pitfall will also be discussed.  The background information for the show incorporates the story of King David and how his sin of adultery had a major affect on his family.

This broadcast is the prelude to Brenda Johnson Padgitt’s upcoming book.  “Adultery Was Never God’s Will: The Aftermath On The Family,” takes a look at the lies, deceit, betrayal, disrespect, and murder that was involved in the act of adultery between David and Bathsheba.  This book also takes a look at the aftermath it had on David’s family.  Even though David was a man after God’s own heart, his sin of adultery displeased God.  Many remember David for his prayer of repentance in Psalm 51. God forgave David but God also promised that the SWORD would never leave David’s house. God also sent word through Nathan that David would suffer calamity within his own household. (2 Samuel 12:9-12)

Padgitt for more information on this show at: aswifttradio@yahoo.com.  You can also visit: http://www.aswifttradio.net 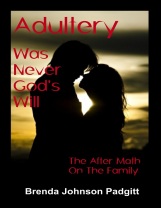